Scandic To Go, the mobile hotel room, was awarded a Bronze Pencil in one of the world’s most prestigious creative competitions, One Show, in category Design: Experiences – Brand Installations. The award was given out on Thursday in New York.

Scandic To Go is a hotel category of its own. It’s a mobile hotel room which can be placed at almost any dream location – with all the comfort you expect in a ordinary room. The Scandic To Go campaign is a collaboration between PR agency Prime and Scandic.

“We wanted to find a creative way to show what a journey Scandic has done over the last couple of years. We’ve performed a major renovation of our hotel portfolio and opened completely new hotels. Scandic To Go gave us the opportunity to show how well designed our rooms actually are now, and it gave us a reason to talk about design in a way we haven’t been able to before. Winning awards is just a bonus!, says Anna Wirén, Marketing Director, Scandic.

Scandic To Go has previously won a gold award in Spinn and been nominated to multiple awards such as Gyllene Hjulet and Guldägget. Other brands in the same category were Nike and Coca Cola.

”Scandic To Go portray the new Scandic in a nice way and it’s an idea that creates attention in several channels all over the Nordics during a long period of time. I think Scandic has shown both courage and endurance during the whole campaign, says Hannes Kerstell, client manager, Prime.

Scandic is the market leader in Nordic hospitality with an network of almost 230 hotels with 42,000 rooms in seven countries and run by 14,000 team members. Scandic Friends is the biggest loyalty program in the Nordic hotel industry with 1.5 million members. Responsibility is a part of Scandic’s DNA and Scandic is the ‘best hotel brand’ in the Nordics (BDRC 2014).

In an effort to bring innovation to the hotel industry and offer unique solutions for guests, the Nordic hotel chain Scandic is launching a mobile hotel - Scandic To Go - available at any location a guest desires. Scandic To Go holds the same high standards as Scandic’s newly refurbished and designed hotels, equipped with all the amenities expected for a pleasant hotel stay. 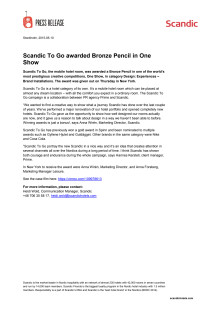 Scandic To Go, the mobile hotel room, was awarded a Bronze Pencil in one of the world’s most prestigious creative competitions, One Show, in category Design: Experiences – Brand Installations. The award was given out on Thursday in New York.