Today, Grand Central by Scandic is opening the doors to a new world of culture, art and music. The hotel has been combined with Vasateatern’s historic premises to become Scandic’s second signature hotel. In doing so, Grand Central is consolidating its position as the undisputed scene for musical and theater events in central Stockholm. 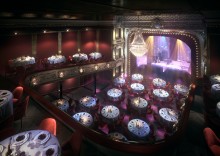 The curtain will soon go up again at the Vasateatern theatre in Stockholm. After having stood empty since 2009, the classic private theatre will live once more in a new guise. A vibrant cultural scene for theatre and music will become a reality when the splendid building is joined to Scandic Grand Central to create a one-of-a-kind hotel with restaurants and bars.