Scandic Hotels, the largest hotel operator in the Nordics, is taking over one of Norway’s most prominent hotels – Hotel Norge in Bergen. The hotel, which was built in 1885, is Bergen’s oldest hotel and will from the beginning of the fall of 2016, be completely transformed to claim its place as the top hotel in the city.

Scandic will take over the hotel on September 1, 2016 and subsequently begin the renovation, which will be carried out in close cooperation with the property owner and take into account the hotel’s history and uniqueness. The hotel will remain open during the renovation, which is scheduled for completion by autumn 2017. The renovated hotel area is projected to be 20,000 m2 with 390 rooms and extensive dining and meeting facilities. The hotel willin conjunction with the renovationalsobe extendedwith moreroomsandthen becomeBergen'slargest hotel.

- The classic Bergen hotel will have a unique and prominent position in our hotel portfolio. By significantly upgrading and transforming the hotel and couple it with our popular and strong customer offering, our vision is to firmly re-establish Hotel Norge as the flagship hotel it once was, says Frank Fiskers, President & CEO of Scandic Hotels.

- The market in Western Norway is currently tough and the pressure to retain Hotel Norge's position in the top tier is great. This is why we have chosen Scandic as our long-term partner, in part because of the company's willingness to invest but also because of the strong expertise Scandic possesses to develop and operate hotels. We look forward to Hotel Norge continuing to consolidate its position as one of Norway's best hotels, says Geir Hove on behalf of the property owner.

The property owner Hotel Norge Holding is owned 50 percent each by Geir Hove and Glastad Farsund. The transaction is conditional on approval by the Norwegian Competition Authority.

Scandic is the market leader in Nordic hospitality with an network of almost 230 hotels with 42,000 rooms in seven countries and run by 14,000 team members. Scandic Friends is the biggest loyalty program in the Nordic hotel industry with 1.5 million members. Responsibility is a part of Scandic’s DNA and Scandic is the ‘best hotel brand’ in the Nordics (BDRC 2014). 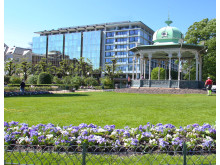