The largest hotel company in the Nordics signs a major new hotel in the centre of Stavanger, Norway. With 350 rooms and vast conference facilities, Scandic is positioning itself for the competition in the oil city.

“As the market leader, it is natural for us to lead the development of major destinations. We are proactive and will establish new hotels in attractive destinations where we see strong demand. This contributes to Scandic’s growth and strengthens our position as the leading Nordic hotel company”, says Frank Fiskers, President & CEO of Scandic.

Earlier this year, Scandic acquired Rica Hotels and currently has six hotels in Stavanger. Scandic Stavanger Congress becomes the seventh and by far the largest hotel with 350 rooms, and conference facilities with a roof-top terrace with stunning views over the Stavanger harbour. In addition to a two-floors restaurant, a bar and a fitness centre, the hotel will have a total of 15 meeting rooms - the largest being 1,000 square metres.

“From being a city with a chronic shortage of hotel rooms, there are now a number of new hotels being established in Stavanger. The city is growing fast and as the market leader, it is important for Scandic to offer a wide range of hotels. In this high competition market we will be well-positioned to win”, says Svein Arild Steen-Mevold, Managing Director, Scandic Norway.

Already in 2016, the Scandic Stavanger Congress will receive its first guests. The real estate developer is Herman Wedels Plass AS, a company owned by Kjell Madland.

Scandic is the unrivalled market leader in the Nordics with nearly 230 hotels, since the acquisition of Rica. Every day, our 13,000 team members work with one single goal in mind, to make our guests welcome to stay with us or meet with friends or for work. As the Nordic region´s most sustainable hotel chain we´re always focused on the environment, social responsibility and accessibility. 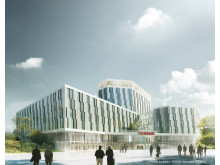